A LETTER TO OUR SPECTATOR 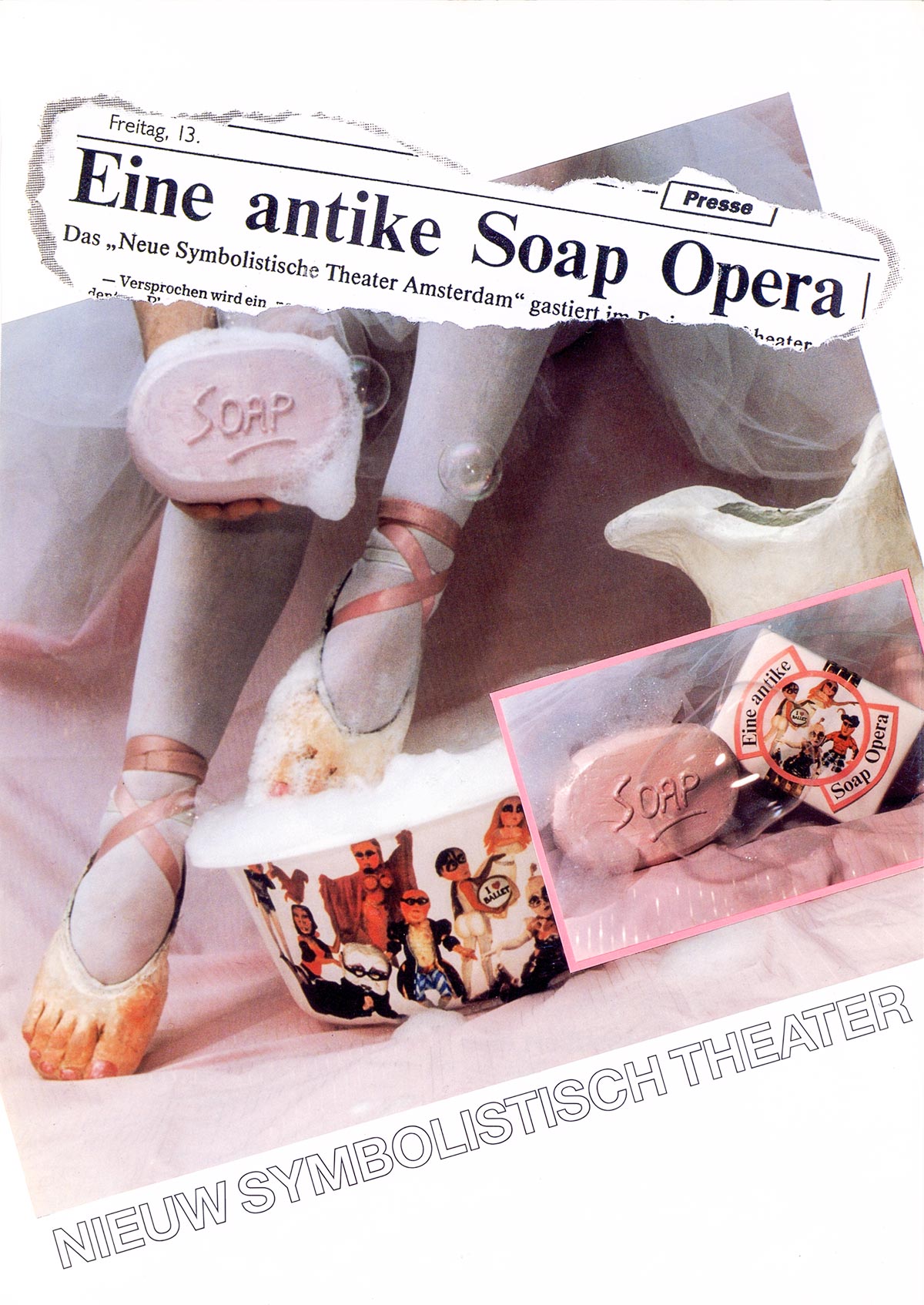 A LETTER TO OUR SPECTATOR

When you come to see “antike Soap Opera”, the first thing you notice when the curtain rises is a superior classicistic scenery which represents a “Temple of Culture”. It looks “familiar”, it reminds you on some operette – inscenations or certain TV shows. You wander what are you about to see. Maybe an opera? Maybe a parody on opera? Maybe a “soap opera”?

But, that’s not quite like that: the characters who soon start appearing on stage are shockingly bizarre figures, living “ubermarionettes”, gigantic puppets – caricatures emerging from the world of opera, ballet, paintings, styles, history, literature.
Acts (sketches) that they perform remind you of CARTOON. Everything is possible:

Mme Butterfly appears as a caterpillar who later transforms into a butterfly with 4m span inflatable plastic wings; her Prince appears to be a “giant Suzuki” – half Samurai, half Japanese Suzuki car; A ballerina flies 5m high over the scenery, and in a sequence of “Swan lake” she mutates into actual bird; “An der schonen, blauen Donau” is a background music for a lady whose crinoline turns into a bath-tube full of foam wherein she drowns; A Venus (a mixture of “secretary” and a mermaid) is being born from soap-bubbles in a giant golden shell.
This and much more make the world of “antike Soap Opera”. With all characteristics of “Chaos.

Yet, you soon realize there is a method to this madness.
The reason why you follow the action and travel through this obscure world without trouble is because the authors have used a COMMON KNOWLEDGE about Art & Culture as a base-material for “antike Soap Opera”.
POPULAR CULTURAL VOCABULARY IS THE LANGUAGE OF “ANTIKE SOAP OPERA”, so the show doesn’t need experts of opera, ballet or art to understand it’s meanings.
HUMOR & IMAGES OF ANTIKE SOAP OPERA SPEAK TO EVERYBODY.

THE ART OF MAKING GROTESQUE

The show is composed in a form of a revue: a serial of show-numbers, burlesque love-soap-stories with a Presentator appearing in-between.
Each “story” (sketch) reflects the whole network of common images (clichés) around a given theme. The process of creating meanings in “anitike Soap Opera” can be compared to process of playing a game of (free) associations.
For example, in a Japanese number, following Images are being associated: Mnie Butterfly, butterfly – caterpillar, Summu- warrior – Japanese car, Kodak, Suzuki,etc.
In short: everything what we – in a superficial manner – attribute to image of Far East and Japan.

In “antike Soap Opera” a vigorous COMBINATION OF THESE FAMILLIAR IMAGES occurs and in this process entirely new meanings are being born.
In this way, a “cliché”- way of seeing things is being broken and a new metaphor created. Which is a process of making GROTESQUE.

The “Style” and “method” of producing humor in “Elne antike Soap Opera” differ a great deal from other types of comedy.
It would be totally wrong to identify it with a PARODY, PERSIFLAGE or SATIRE. Contrary to PARODY, which takes a familiar situation or an actual (particular) person and carries it further into absurd, “Eine antike Soap Opera” takes familiar cliches ONLY as ingredients for a MIXTURE – the result of this being an entirely ORIGINAL IMAGE WITH A NEW MEANNING.

Having all this in mind, It would be more appropriate to describe “Eine antike Soap Opera” as a GROTESC VISUAL COMEDY.
“Grotesc” – because of method of producing meanings;
“Visual” – because the “language” used here are images;
“Comedy” – because the end-result is humor.

A MATTER OF “TASTE”

“Eine antike Soap Opera” comments on common habit to recognize some things in art as “good taste” versus “bad taste” and “kitsch”.
More than often, this expression of “good taste” reads not as a sign of education & knowledge, but opposite: as snobbism dictated by trend & fashion, which is nothing else but a camouflage for LACK of knowledge.

As we already mentioned, the material for “Eine antike Soap Opera” is based on popular cultural vocabulary, or – on so-called-“general” knowledge about art & culture. We all must agree that this – so high-priced “general” knowledge / which increases our social feeling of self-confidence and which makes us “civilized” citizens/ is – in fact – nothing else but MOSAIC OF CULTURAL HEADLINES, bits and pieces of information & images. We all handle so many titles, so many names, notions, but WHY DO WE REALY NEED THIS “CULTURAL PACKAGE” WITH SUPERFICIAL MEANING? “Eine antike Soap Opera” uses the opportunity to use this “cultural bubbles”- and to create a whole new reality from it.

“Rode Faden” of the show might be looked for In the character of Presentator. She is an expert for “good taste” and her world, the Temple of Culture, is the WORLD OF BUBBLES. In ironical way, this world of headline-images, fragmentary & senseless – disperses like a soap-bubble, yet leaving in its place a new created reality : THE REALITY OF GROTESQUE.

The title of the show should be understood as an ambiguous play on words, where:
“ANTIKE” means “TRADITIONAL”, “THAT WHAT HAS A DECLARED VALUE”;
“SOAP OPERA” aludes to SOAP (Cultural bubbles as soap-bubbles) and to actual “soap opera”- a term commonly used to describe TV serial with endless flow of needless action;
Finaly, “OPERA” can signify the use of many opera-fragments and frequent appearance of opera- inspired characters in “EINE ANTIKE SOAP OPERA”.

This site uses Akismet to reduce spam. Learn how your comment data is processed.