BIG IMPRESARIO STORY – THE END – “YOU ARE FINISHED HERE!”

BIG IMPRESARIO STORY – THE END
“YOU ARE FINISHED HERE!”

It was at Kulturbörse Kleve, where we already for several years in a row hired a stand. A man approached us at our booth, had a look at our material and asked if we would like to have a tour through big theatres in Holland. He handed us his business card and introduced himself as one of the biggest impresario in Holland. He said he’ll be in touch with us.
A couple of days later we were already sitting in his Scheveningen office – breathtaking view facing the open sea. And only a couple of weeks later in that office we discussed a contract for around 30–40 bookings all in huge 800+ theatres through Holland. The fee was agreed and we signed it.
So very ambitiously we throw ourselves to work – we revamped the show, adding another scene to prolong it as required, and spent the whole summer polishing and perfecting every detail to it. On top we had the opportunity to run the show in this theatre in Köln for full 2 weeks, so we were pretty prepared.
And then the big ‘premiere’ happened: in Rijswijk Theatre (never figured out why did they called it a premiere when it was played already for years).
Everything worked flawlessly, there was laughter, applause, and flowers in the end. No one from the impresariat in question was present, but we were in the seventh heaven, celebrating ultimate success with a few friends.
The phone rings at 7:00 AM the next day. Impresario requests that we immediately come to his office in Den Haag. Upon arrival – we are greeted by a whole “delegation”, all angry faces. Impresario tossed the newspaper across the table, “What is this?” He asked angry and red in the face, pointing his finger at some, obviously bad, review in some local newspaper.
Still in disbelief that such a trifle can make anyone so angry, we ask “Is it necessary to be so angry about this?”
“No, not only for that,” said the impresario. “There are more things … Last night, our artists were at the premiere, and they told us the show was bullshit.” (“The artists” were a duo of famous clowns whose opinion is obviously an oath to him, who for god knows what reasons, perhaps jealousy? – stated that the play was inappropriate to the level of impresariat).
And, to our total astonishment, he grabs the telephone and starts cancelling booked performances. Calling directors of theatres saying “You better cancel this one, I am sorry I sold you this, it is a total disaster!“
Some of them cancelled indeed, the others couldn’t because they sold a lot of tickets already, but were totally confused and in panic what to do. When he cancelled what he could and at least ‘warned’ the rest, he turned to us and said:
“You are finished here“ (he meant in Holland).
And we left the office. And the same evening we had to play.
When we arrived to the cold, cold theatre, greeted with a gloomy atmosphere and terrible coldness even from house-technicians, like we were criminals on the death row – we started to prepare for the show.
And then the audience came in and we had to play. Thank god this “comedy“ was with masks, and the sound was pre-recorded; it wouldn’t be very funny if we had to play using our own faces and voice at that moment.
However, the audience reaction was extremely enthusiastic; the theatre director approached us in the break and said – he enjoyed every minute of the show and found it “unbelievably strange that our agent called him and tried to cancel the show. He didn’t understand what was going on and why the agent would try to cancel the show and ruin us“.
We continued the conversation after the show and he said he won’t leave it like that, he was going to write a letter to impresario. Which he did ( read here )
Performances in other theatres followed. Every day the same torture before the start over and over again, the hostile atmosphere before the start, then an effort to play the best we could, then succeeding at the end and proofing over and over again that we were not bad. Angry letters from more theatre directors to impresario followed.
We completed the tour, got paid, never saw impresario again. We were devastated by what impresario did to us. We never figured out what the reason was for his actions.
There were rumours why he would ruin us, but it all stayed a conspiracy theory – a mystery. Was it indeed a bad review in an unimportant local paper (the critic wonders provocatively though why the impresariat needed to bring something like this on a tour to the big theatres in the Netherlands, and thus probably desecrate the ‘higher Kunst’ that governs these high places)?
Was it indeed that the 2 celebrity clowns didn’t like the show, or maybe they felt threatened that something new and FUNNY is emerging?
Impresario never came to see the show.
A bitter taste, our apartment full of flowers, like a funeral room.
As it will turn out, it was the funeral for our production, and our naivety. Saying perhaps “You flew too high, in this country there is no place for you at the scene of commercial theatre, that’s for sure.“
We thought we played this “comedy“ for far too long, too many times already, anyway, maybe it was time for something different.

But read on… Better is yet to come! 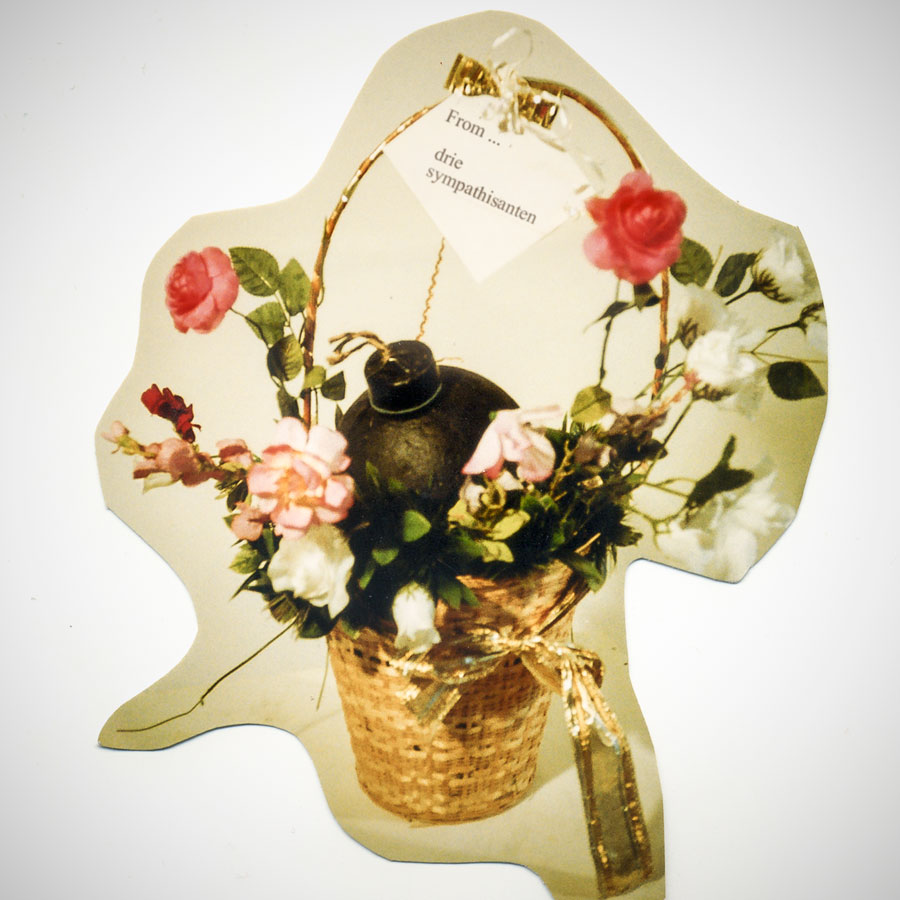 The Flower Basket – Bomb! Used in “Le Triomphe…” to symbolically DESTROY The temple of culture.

Next CHAPTER:
THE STORY OF MIRACLES NOW: DISASTEROUS ATTEMPT OF FITTING IN / BELONGING TO DUTCH THEATRE SCENE

“Yesterday we had the Antike Soap Opera in house.
The title of the performance indicated exactly what you would expect.
An antique element in terms of the lyrics. The soap element as far as the scenes are concerned.

The spectators were unanimously enthusiastic and impressed by the creativity that Iva and Petar presented in terms of costumes, decor and performance. The music also suited the whole well.
‘A special, fascinating and above all surprising performance’ were many heard opinions. …”

“I myself had a pleasant evening and I consider this performance as a form of antique art, which is rightfully taken out of the mothballs.
And so you see how different people are.

Since the opinions of my audience and myself are quite different from yours, I am particularly interested in the criteria you have taken to first include this performance in your program-offer and then to reject it practically immediately afterwards.

I am looking forward for you reaction.