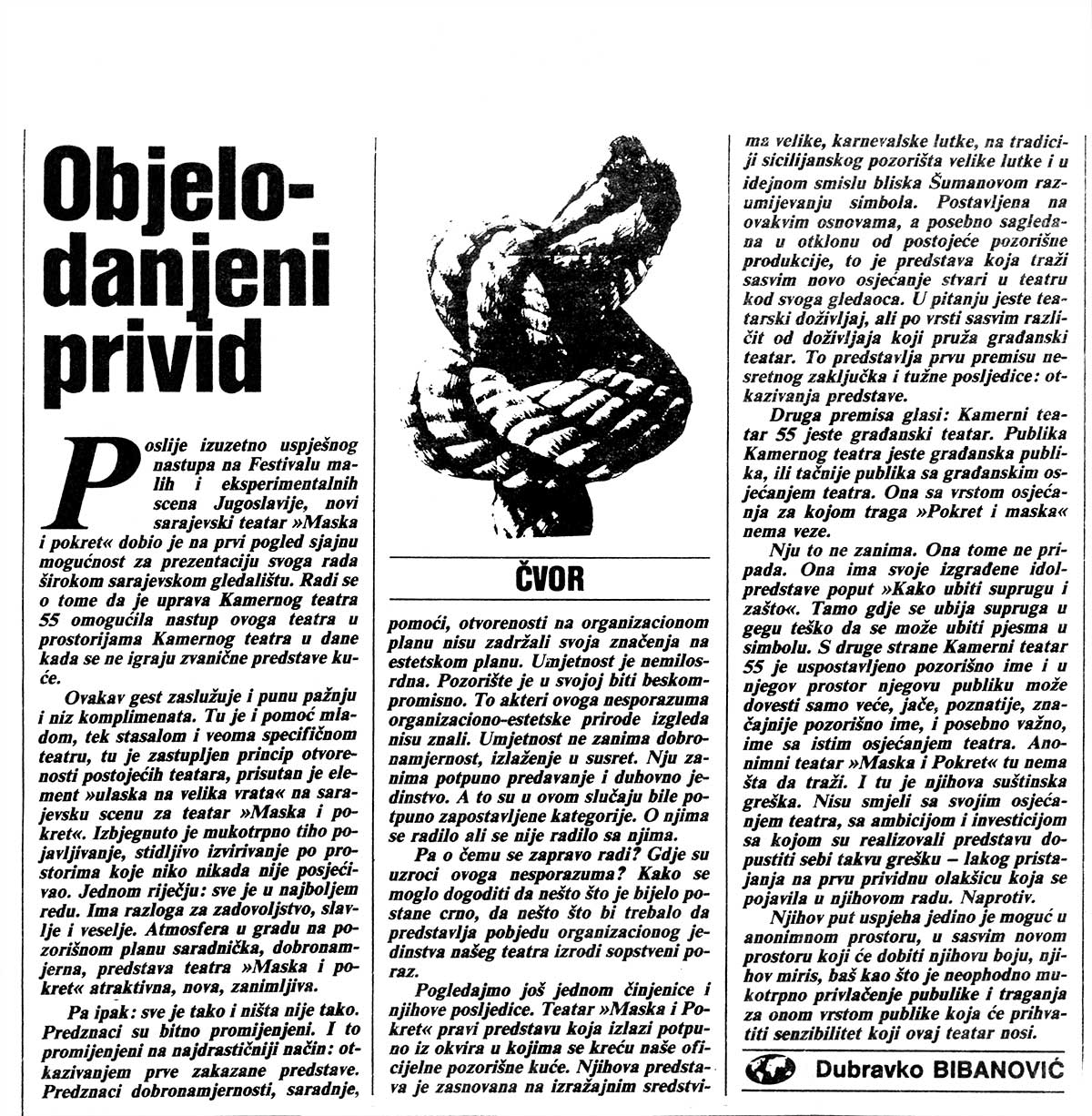 After an extremely successful performance at the Festival of Small and Experimental Stages of Yugoslavia, the new Sarajevo theatre “Maska i Pokret” got, at first sight, a great opportunity for the presentation of their work to a broad Sarajevo audience. It is about the fact that the management of the Kamerni Theatre 55 enabled the performance of this theatre in the premises of the Kamerni Theatre on days when the official performances of the house are not played.

This gesture deserves full attention and a number of compliments. There is help for young, new and very specific theatre, there is the principle of openness of existing theatres, there is an element of “entering the big door” on the Sarajevo stage for theatre “Maska i Pokret”. A painstakingly quiet appearance was avoided, a shy peek through spaces that no one had ever visited. In one word: everything is at its best. There is a reason for satisfaction, celebration and joy. The atmosphere in the city on the theatrical level is cooperative, well-intentioned, the performance of the theatre “Maska i Pokret” is attractive, new, interesting.

And yet: everything is so and nothing is so. The signs have changed significantly. And changed in the most drastic way: by cancelling the first scheduled performance. The signs of goodwill, cooperation, help, openness on the organisational level did not retain their meanings on the aesthetic level. Art is ruthless. Theatre is in its essence uncompromising. The protagonists of this misunderstanding of an organisational-aesthetic nature did not seem to know that. Art is not interested in good-faith, giving-a-hand. She is interested in complete devotion and spiritual unity. And in this case, these were completely neglected categories. It was about them, but it was not with them.

So what is it really about? Where are the causes of this misunderstanding? How could it happen that something that is white becomes black, that something that should represent the victory of the organisational unity of our theatre generates its own defeat.

Let us look once again at the facts and their consequences. Theatre “Maska i Pokret” makes a play that goes completely beyond the framework in which our official theatres move. Their performance is based on the expressive means of a large, carnival puppet, on the tradition of the Sicilian theatre of a large puppet and in an ideological sense close to Schumann’s understanding of symbols. Set on such basis, and especially seen in the deviation from the existing theatrical production, it is a play that seeks a completely new sensibility in theatre from its audience. It is theatrical experience, but in a way completely different from the experience provided by civic theatre. This represents the first premise of unfortunate conclusion and the sad consequence: cancellation of the performance.

The second premise is: Kamerni Theatre 55 is a civic theatre. The audience of the Kamerni Theatre is a civic audience, or more precisely audience with a civic sense of theatre. The one with the kind of feeling “Maska i Pokret” seeks has nothing to do with it. She doesn’t care. She doesn’t belong to that. She has her own built-in idol-shows like “How to Kill Your Wife and Why.” Where a wife is killed in a gag, it is hardly possible to kill a Play in a symbol.

On the other hand, Kamerni Theatre 55 has an established name and only a larger, stronger, more famous, more significant name, and especially important, a name with the same feeling of theatre can bring its audience into its space. The unknown theatre “Maska i Pokret” has nothing here to look for. And there is their essential mistake. With their sense of theatre, with the ambition and investment with which they realised the play, they should not have allowed themselves such a mistake – an easy acceptance of the first apparent comfort that appeared in their work. On the contrary.

Their path to success is only possible in an anonymous space, in a completely new space that will get their colour, their scent, just as it is necessary to painstakingly attract the audience and search for the kind of audience that will accept the sensibility that this theatre carries.