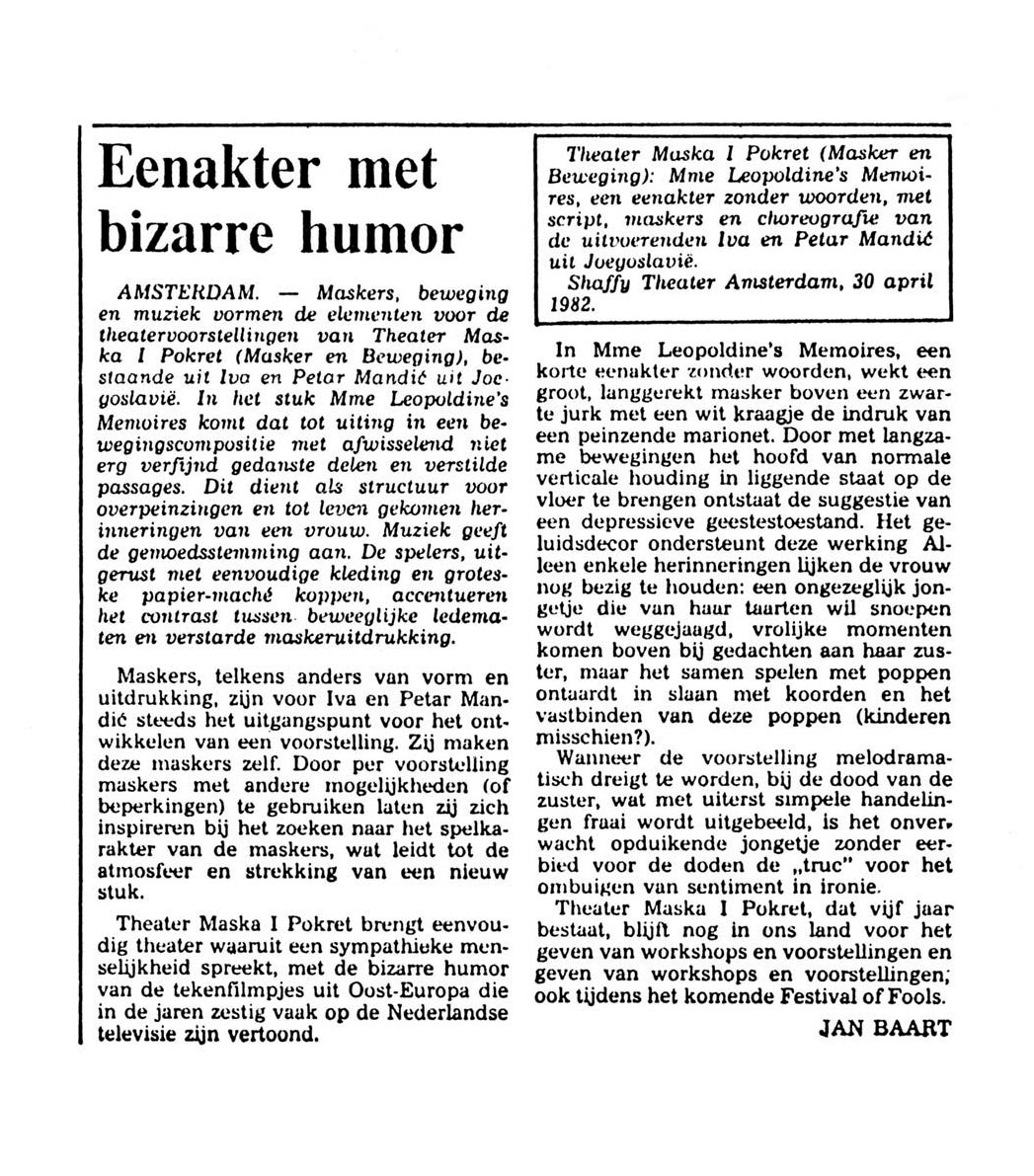 Theatre Maska i Pokret (Mask and Movement): Mme Leopoldine’s Memoires, a one-act play without words, with script, masks and choreography by performers Iva and Petar Mandic from Yugoslavia

AMSTERDAM. – Masks, movement and music are the elements for the theatre performance by Theatre Maska i Pokret (Mask and Movement), consisting of Iva and Peter Mandic from Yugoslavia. In the piece Mme Leopoldine’s Memoires, this is expressed in a not very refined movement-composition alternating danced and hushed parts. This serves as a structure for a woman’s contemplations and memories that have come to life. Music indicates the mood. The actors, outfitted in simple clothing and grotesque papier-mâché heads, accentuate the contrast between mobile limbs and rigid mask expression.

For Iva and Petar Mandic, masks, always different in form and expression, are the starting point for developing a performance. They make these masks themselves. By using masks with different possibilities (or limitations) for each performance, they are inspired to find the play-character of the masks, which leads to the atmosphere and mood of a new piece.

Theatre Maska i Pokret presents simple theatre that expresses sympathetic humanity with the bizarre humour of the cartoons from Eastern Europe that were often shown on Dutch television in the 1960s.

In Mme Leopoldine’s Memoires, a short one-act play without words, a large, elongated mask above a black dress with a white collar creates the impression of a pensive marionette. By moving the head from a normal vertical position to a reclining position on the floor with slow movements, the suggestion of a depressed state of mind is created. The sound décor supports this effect. Only a few memories still seem to occupy the woman: an unruly boy who wants to nibble at her cakes is chased away, happy moments arise from thoughts of her sister, but playing together with puppets degenerates into beating them with cords and tying them up (perhaps children?).

When the performance threatens to become melodramatic, at the death of the sister, which is beautifully depicted with extremely simple actions, the unexpected appearance of a little boy with no reverence for the dead is the “trick” for turning sentiment into irony.

Theatre Maska i Pokret, which is celebrating its fifth anniversary, will still be in our country to give workshops and performances, including during the upcoming Festival of Fools.