FacebookTwitterInstagram
ENTHUSIASM ALONE IS NOT ENOUGH 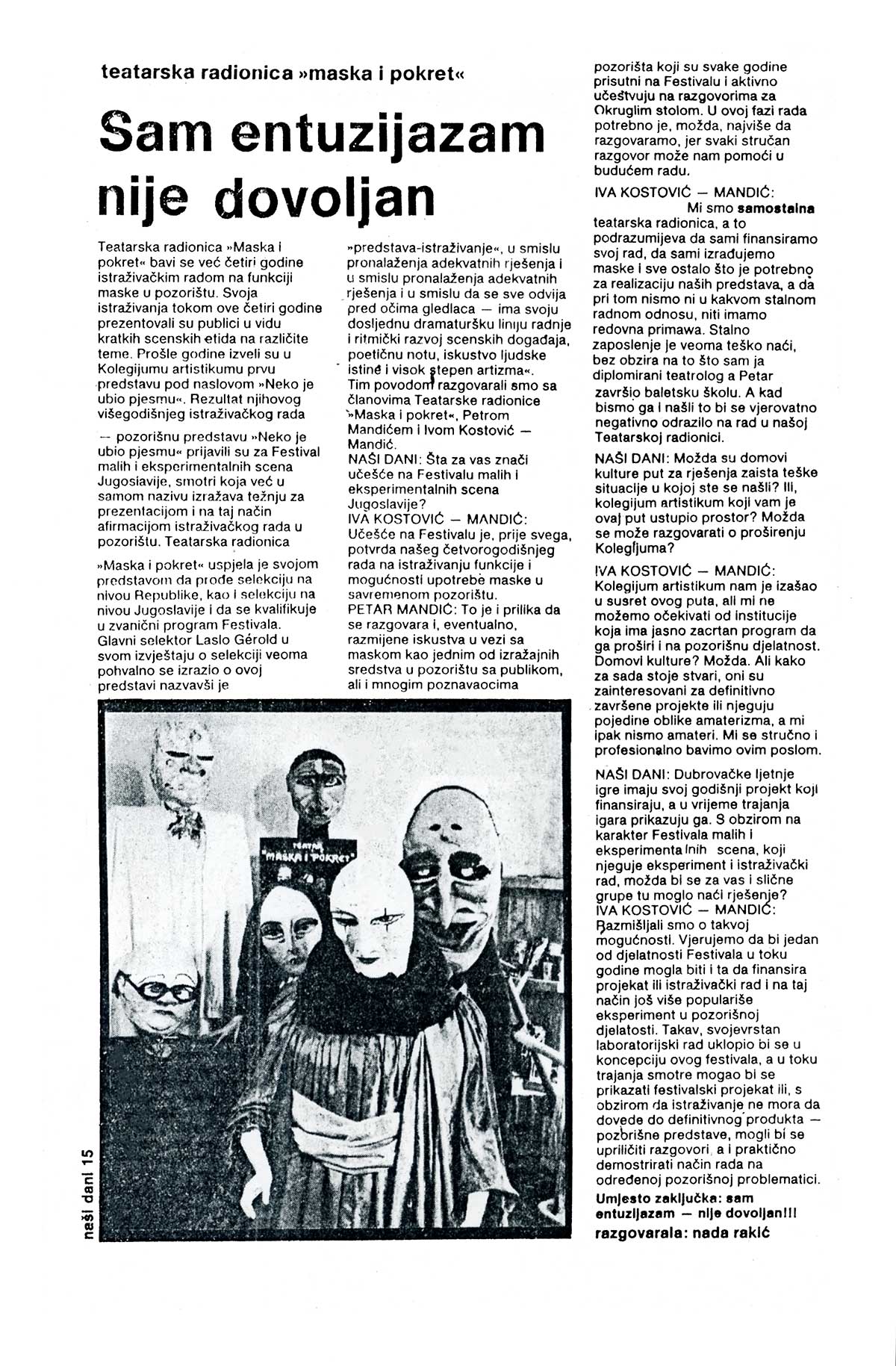 ENTHUSIASM ALONE IS NOT ENOUGH

Theatre workshop “Maska i Pokret” has been engaged in research work on the function of the mask in theatre for already four years. During these four years, they presented their research to the audience in the form of short stage etudes on various topics. Last year, they performed the play entitled “Somebody has Killed the Play” at the Collegium Artisticum. The result of their many years of research work – the play “Somebody has Killed the Play” was submitted for the Festival of Small and Experimental Scenes of Yugoslavia, a festival which in its very name expresses the desire for presentation and thus affirmation of research work in theatre.

Theatre workshop “Maska i Pokret” managed with its play to pass the selection at the level of the Republic, as well as the selection at the level of Yugoslavia and to qualify for the official program of the Festival. Chief selector Laszlo Gerold in his selection report praised this “play-research” in terms of finding adequate solutions, both in terms of finding adequate solutions and in terms of everything taking place in front of viewers – that it has its consistent dramaturgical line of action and rhythmic development of stage events, a poetic note, the experience of human truth and a high degree of artistry”.

On that occasion, we talked with the members of theatre workshop “Maska i Pokret”, Petar Mandić and Iva Kostović – Mandić.

NAŠI DANI: What does participating in the Festival of Small and Experimental Stages of Yugoslavia mean to you?

IVA KOSTOVIĆ – MANDIĆ: Participation in the Festival is, first of all, a confirmation of our four-year work on researching the function and possibility of using the mask in contemporary theatre.

PETAR MANDIĆ: It is also an opportunity to discuss and, eventually, exchange experiences regarding the mask as one of the means of expression in theatre, with the audience but also with many theatre connoisseurs who are present at the Festival every year and actively participate in roundtable discussions. At this stage of work we need to talk, because any professional conversation can help us in our future work.

IVA KOSTOVIČ – MANDIĆ: We are an independent theatre workshop, and that implies that we finance our work ourselves, that we make masks and everything else that is necessary for the realisation of our performances, without being in any permanent employment relationship, nor have a regular income. It is very difficult to find a permanent job, regardless of the fact that I am a graduated theatrologist and Petar finished ballet school. And even if we could find it, it would probably have a negative effect on the work in our Theatre Workshop.

NAŠI DANI: Maybe cultural centres are the way to solve the really difficult situation you find yourself in? Or, Collegium Artisticum that gave you space this time? Maybe it could be possible to talk about expanding the Collegium?

IVA KOSTOVIĆ – MANDIĆ: The Collegium Artisticum came out to meet us this time, but we cannot expect an institution that has a clearly defined program to expand it to theatrical activities. Cultural Centres? Maybe. But as things stand for now, they are interested in definite completed projects or nurture certain forms of amateurism, and yet we are not amateurs. We are competently and professionally engaged in this business.

NAŠI DANI: The Dubrovnik Summer Festival has its own annual project, which they finance, and during the Festival they present it. Given the character of the Festival of Small and Experimental Scenes, which nurtures experiment and research work, perhaps a solution could be found for you and similar groups?

IVA KOSTOVIĆ – MANDIĆ: We thought about such possibility. We believe that one of the activities of the Festival during the year could be to finance a project or research work and thus further popularise the experiment in theatrical activities. Such kind of laboratory work would fit into the concept of this festival, and during the festival the festival project could be presented or, since the research does not have to lead to a definitive product – a theatrical performance, conversations could be organised and practically demonstrate the way of working on the particular theatrical issue.

Instead of conclusion: enthusiasm alone is not enough !!!