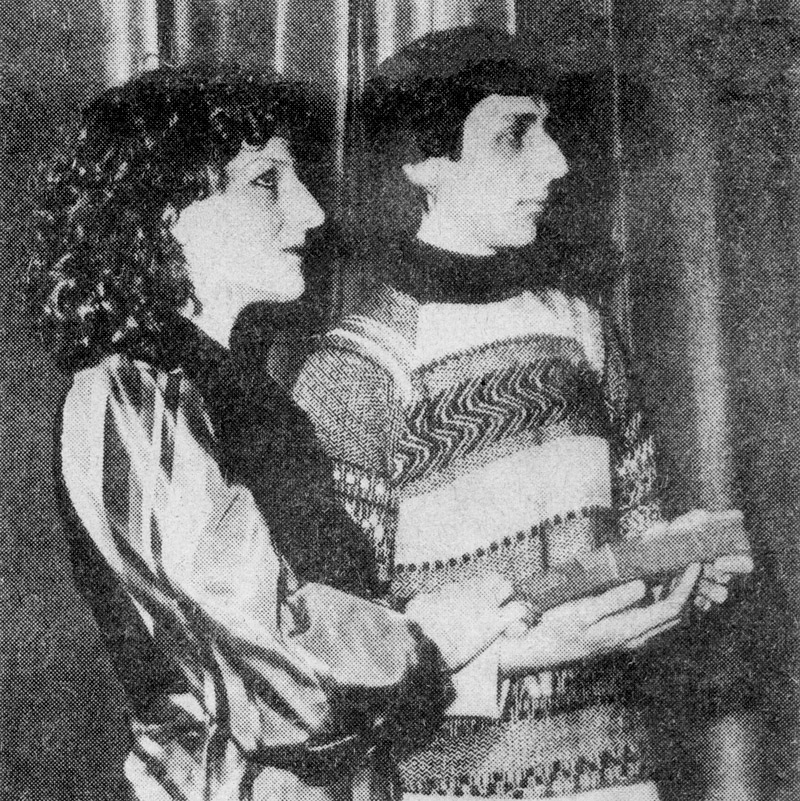 SOMEBODY HAS KILLED THE PLAY – 22 FESTIVAL MESS

Suddenly we found ourselves in the official program of the International Festival of Small and Experimental Scenes – MESS Festival. The news was brought by Iva’s mother one morning over coffee; a big headline in the newspaper “unknown theatre in the official competition”. It turned out that the main selector of the festival was two months ago at our premiere of “Somebody has Killed the Play” on December 12, 1980, at the Collegium Artisticum.

We had our premiere in the main exhibition hall of the Sarajevo Gallery of Modern Art, Collegium Artisticum. Large exhibition space in the basement of the Skenderia Cultural Centre. White sterile space, white marble floor, white decor ‘disturbed’ by threatening black curtains where behind and in front of which all the action of the play took place; what the audience saw in front of the curtains – was evident through dance and action on stage, and what the audience could only guess was hidden behind the curtains. The bare white space cut out with black entrances/exits enhanced the symbolic level of the play, that what is seen and what is not seen, evil and beauty, sacred and secret. In the middle of the stage is a white stone sacrifice altar.

Iva’s mother took care of the printing of the invitations and posters and worked on the promotion of the play too, so many writers, poets, journalists, reporters and her colleagues from the radio station came to the premiere. Iva’s mother was the chief editor of the children’s educational department of Radio Sarajevo.
Our friends Zizi and Emin who were good in music equipment took care of the adequate sound system for the show.

The premiere happened as a dream, a moment of astonishment, a moment of silence and a moment of unreal – everything hovered; the action, the music, the silence, like on an air cushion on a marble floor and was suddenly “spoiled” with a big applause.

Read here an essay from Kaća Čelan about our premiere night.

– On the notion of the ‘Premiere’. What did it mean for us, stubbornly, from that time on –
For us, the premiere meant literally the first public performance of the play in front of the audience. It was a kind of challenge for us as creators and performers of the play, to catch and experience that “virgin” reaction of the audience – not tuned and altered by the later corrections of the play. Stubbornly defending that postulate cost us later our reputation in the Netherlands and had a negative impact on our career.

IN THE SPOTLIGHT – BREAKTHROUGH

The announcement that an unknown theatre group is coming to the international festival, and that it is from Sarajevo itself, has encouraged many journalists to find out who these people are and to spread that sensational news even more. This was followed by interviews in our apartment, photo sessions, radio interviews, etc.

Not only was the play “Somebody has Killed the Play” awarded by the official jury of critics, journalists and the audience panel with the “Three Golden Star” – the award for the most thoughtful experiment at MESS, but also independently, a group of theatre critics, dramaturgs and theatre scholars joined and declared that the play “Somebody has Killed the Play” was the most appropriate to the original intentions of this festival and, therefore, its the most significant event. (read review)

That evening, we were invited to Hotel Central, where Nada Rakić and Marko Kovačević, on behalf of all signatories, read an unofficial award signed by the most prominent theatre and artistic personalities of Sarajevo and Yugoslavia and awarded an artistic painting by the academic painter Edin Numankadić.

It was our unofficial moment of official recognition.

Next: TIJANA IN THE WORLD OF MASKS