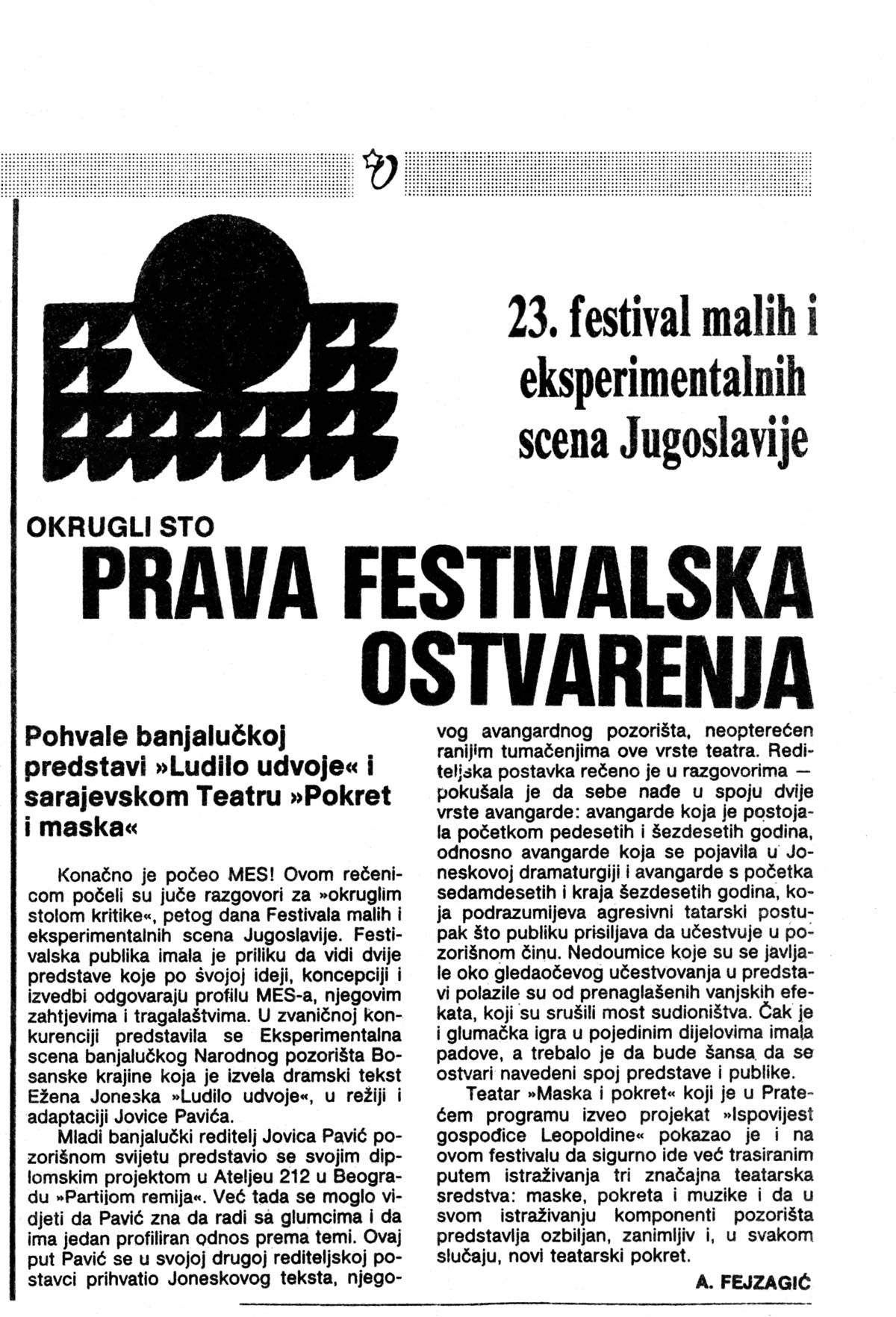 23rd FESTIVAL OF SMALL AND EXPERIMENTAL SCENES OF YUGOSLAVIA

Finally, the MESS has started! With this sentence, the talks at the “Critic’s Round Table”, of the fifth day of the Festival of Small and Experimental Scenes of Yugoslavia, began yesterday. The festival audience had the opportunity to see two performances that, in terms of their idea, concept and performance, correspond to the profile of MESS, its demands and its quests. In the official competition, the Experimental Stage of the Banja Luka National Theatre of the Bosnian Krajina was presented, performing the dramatic text by Eugène Ionesco “Delirium for Two”, directed and adapted by Jovica Pavić.
The young Banja Luka director Jovica Pavić presented himself to the theatre world with his graduation project in Atelje 212 in Belgrade, “Rummy Party”. Even then, it could be seen that Pavić knows how to work with actors and that he has a profiled attitude towards the topic. This time, in his second directorial production, Pavić took Ionesco’s text, his avant-garde theatre, unencumbered by earlier interpretations of this type of theatre. The directorial setting as said in conversations – tried to find itself in a combination of two types of the avant-garde: the avant-garde that existed in the early fifties and sixties, ie. avant-garde that appeared in Ionesco’s dramaturgy and the avant-garde from the early seventies and late sixties, which includes an aggressive Tatarian procedure that forces the audience to participate in the theatrical act. The doubts that arose about the spectator’s participation in the play started from the overemphasised external effects, which destroyed the bridge of participation. Even the acting in some parts had its downfalls, and that should have been a chance to realise the aforementioned blend of performance and audience.

The “Maska i Pokret” Theatre, which performed “Mme Leopoldine’s Memoires” project in the accompanying program, showed also at this festival that he is certainly following the already well-established path of researching three important theatrical means: masks, movements and music, and that in his research of these components of the theatre, presents a serious, interesting and, in any case, new theatrical movement.