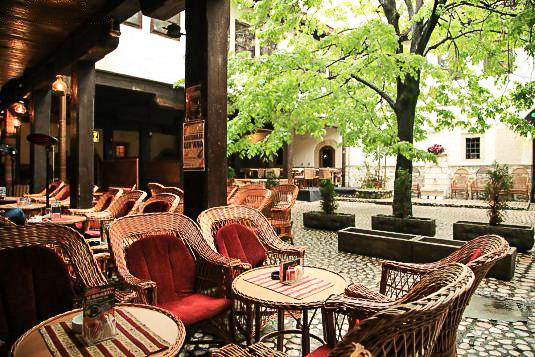 A friend had an opportunity to use a community theatre to stage a new performance. He offered me to put a programme together. He also invited Petar with his dance group. We had a meeting in an old Ottoman garden café called Morića Han. So we sat at opposite sides of the table facing each other. That is how we first met.

And so we met 35 years ago and soon became ONE forever – in love, in life and in work.

35 years later, we found ourselves again in Sarajevo. Wanting to show our daughter and her boyfriend where we first met, we were walking through the old town. It was in the middle of the night and we were overwhelmed by memories, emotions, dealing with the unexplainable feeling of streets getting smaller than they were in our memory. The city was extremely quiet, there was hardly anybody on the streets. The streets were shiny, just washed with rain.

And then we saw the place: For an unknown reason, ONLY that place – the old Ottoman garden where we met 35 years ago – in the whole old town had its doors wide open and inviting. Lighted lampions in all colours were hanging everywhere and there were Persian carpets lying in piles, but there was nobody in sight. It seemed unreal – as if this scenery belonging to some Ottoman fairy-tale was staged specially for us.
One of those intense/blissful moments. “Aladdin” meets “Spirited Away”. We thought we were dreaming, but we were not. That happened for real. 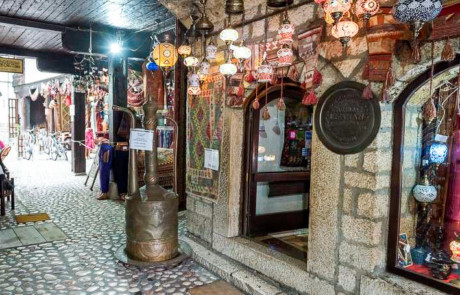 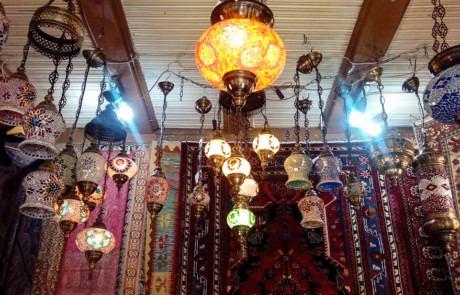 On the wall of Morića Han: Calligraphy inscriptions from a poem written by Persian poet Omar Khayyám. 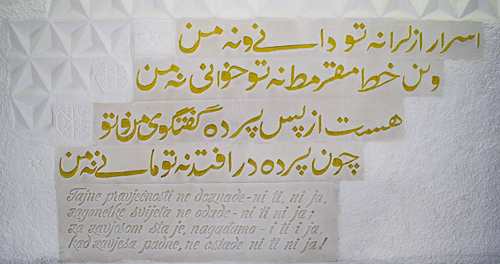 Next: Dance Group Pokret i Maska