FacebookTwitterInstagram
SEARCHING THROUGH MOVEMENT AND MASK 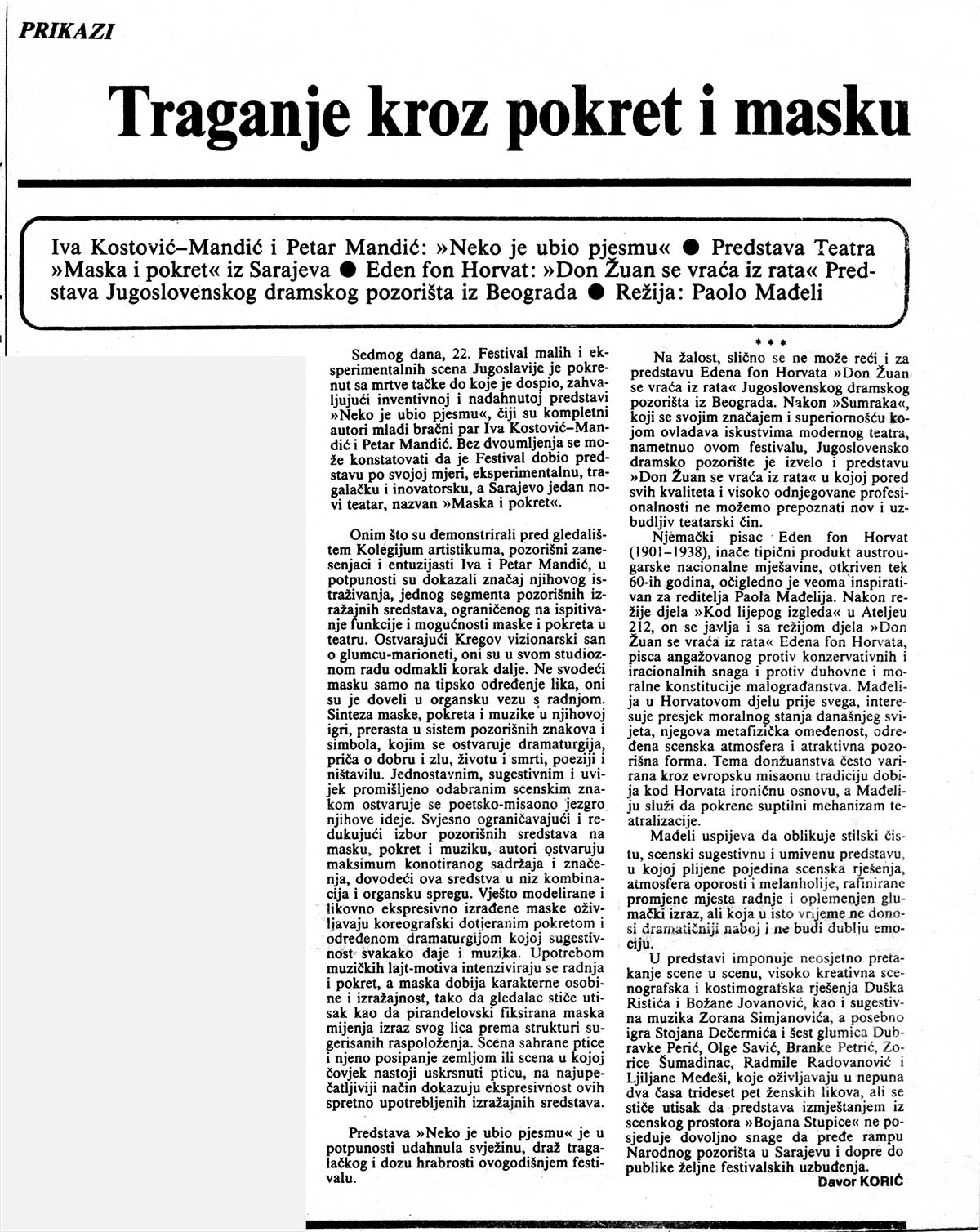 SEARCHING THROUGH MOVEMENT AND MASK

On the seventh day, the 22nd Festival of Small and Experimental Scenes of Yugoslavia moved from the deadlock it reached, thanks to the inventive and inspiring play “Somebody has Killed the Play”, whose complete authors are the young married couple Iva Kostović-Mandić and Petar Mandić. It can be stated without hesitation that Festival received the play tailored to its needs, experimental, exploratory, and innovative, and Sarajevo a new theatre, called “Maska i Pokret”.

By what they demonstrated in front of the spectators of Collegium Artistcum, theatre devotees and enthusiasts Iva and Petar Mandić, completely proved the importance of their research, a segment of theatrical means of expression, limited to examining the function and possibilities of mask and movement in theatre. Realising Craig’s visionary dream of an actor-marionette, they went a step further in their research work. By not reducing the mask to a type definition of the character, they brought it into an organic connection with the plot.

The synthesis of the mask, movement, and music in their play outgrow into a system of theatrical signs and symbols, by which is realised dramaturgy, the story of good and evil, life and death, poetry and nothingness. The poetic-thought core of their idea is realised with a simple, suggestive, and always thoughtfully chosen stage sign. By consciously limiting and reducing the choice of theatrical means to mask, movement and music, the authors achieve the maximum of connoted content and meaning, bringing these means into an array of combinations and organic coupling. Skillfully modelled and visually expressive masks come to life with choreographically refined movement and a particular dramaturgy which is certainly suggested by music as well. The use of musical leitmotifs intensifies the action and movement, and the mask acquires character traits and expressiveness so that the viewer gets the impression that the Pirandellian fixed mask changes the face expression according to the structure of the suggested moods. The scene of the burial of a bird and its sprinkling with earth, or the scene in which man seeks to resurrect a bird, proves in the most impressive way the expressiveness of these skilfully used means of expression.

The play “Somebody has Killed the Play” completely breathed in the freshness, the charm of the seeker, and a dose of courage to this year’s festival.

Unfortunately, the same cannot be said for Eden von Horvat’s play “Don Juan Returns from the War” by the Yugoslav Drama Theater from Belgrade. After “Twilight”, which with its significance and superiority masters the experiences of modern theatre, imposed itself on this festival, the Yugoslav Drama Theatre performed “Don Juan Returns from War” in which, despite all the qualities and highly nurtured professionalism, we cannot recognise a new and exciting theatrical act.
The German writer Eden von Horvat (1901-1938), otherwise a typical product of the Austro-Hungarian national mixture, discovered only in the 1960s, is obviously very inspiring for director Paolo Magelli. After directing “At a Good Look” in Atelier 212, he also directed “Don Juan Returns from the War” by Eden von Horvat, a writer engaged against conservative and irrational forces and against the spiritual and moral constitution of the petty bourgeoisie. In Horvat’s work, Magelli is primarily interested in the cross-section of the moral state of today’s world, its metaphysical limitations, a certain stage atmosphere and an attractive theatrical form. The theme of Don Juan, often varied throughout the European thought tradition, gained an ironic base in von Horvat’s, and served Magelli to initiate a subtle mechanism of theatricalisation.
Magelli manages to form a stylistically clean, scenically suggestive, and washed-out play, in which certain stage solutions, an atmosphere of bitterness and melancholy, refined changes of scene, and refined acting expression captivate, but which at the same time does not bring a dramatic charge and arouse deeper emotion.
The play impresses with the imperceptible flow of scene into scene, highly creative scenographic and costume design solutions of Duško Ristić and Božana Jovanović, as well as the suggestive music of Zoran Simjanović, and especially the play of Stojan Dečermić and six actresses Dubravka Perić, Olga Savić, Branka Petrić, Zorica Šumadinac, Radmica and Ljiljana Medješa, who bring to life thirty-five female characters in less than two hours, but the impression is that the play does not have enough strength to cross the ramp of the National Theatre in Sarajevo and reach the audience eager for festival excitement.
Davor KORIĆ