FacebookTwitterInstagram
SURPRISING PLAY OF THE YUGOSLAVS 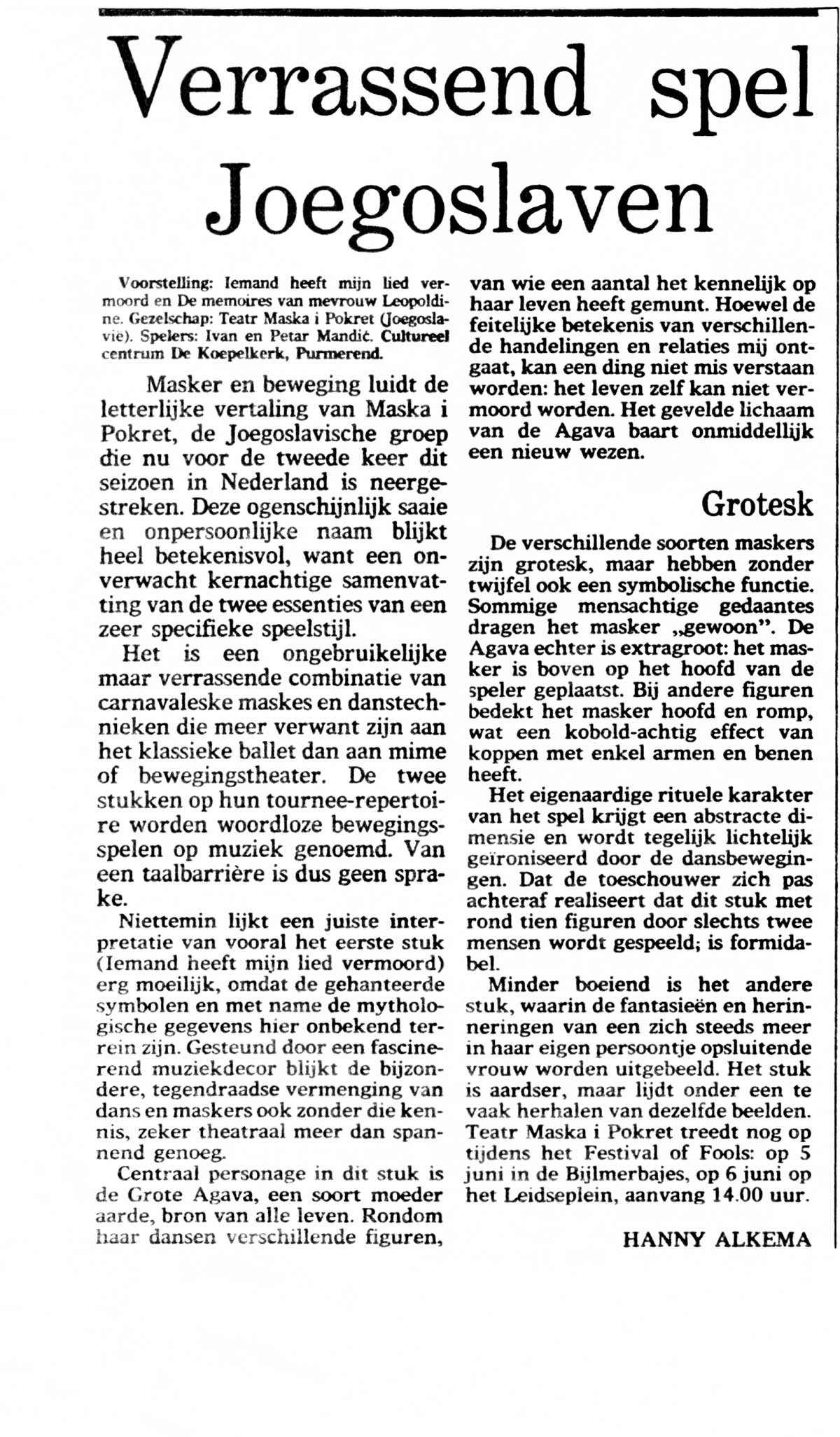 SURPRISING PLAY OF THE YUGOSLAVS

Mask and movement is the literal translation of Maska i Pokret, the Yugoslavian group that has now settled in the Netherlands for the second time this season. This seemingly dull and impersonal name seems very meaningful because it unexpectedly and essentially combines these two essential elements into one very specific performing style.
It is an unusual but surprising combination of carnivalesque masks and dance techniques, more akin to classical ballet than to mime or movement-theatre. The two pieces on their touring repertoire are called wordless plays with music. There is therefore no question of a language barrier.
Nevertheless, a correct interpretation of especially the first piece (Somebody has Killed the Play) seems very difficult, because the symbols used and especially the mythological details are unknown territory here. Supported by the fascinating musical decor, the special, unruly mixture of dance and masks, even without that knowledge, turns out to be more than exciting enough, certainly theatrically.
The central character in this piece is the Great Agava, a kind of mother earth, the source of all life. Various figures dance around her, a number of whom apparently aim for her life. While the actual meaning of various actions and relationships escapes me, one thing cannot be misunderstood: life itself cannot be murdered. The felled body of the Agava immediately gives birth to a new being.

GROTESQUE
Different types of masks are grotesque, but without a doubt they also have a symbolic function. Some human-like figures simply wear the mask. The Agava, however, is extra-large: the mask is placed on top of the performer’s head. In other figures the mask covers the head and torso, which has a goblin-like effect of heads with only arms and legs.
The peculiar ritual character of the performance acquires an abstract dimension and is at the same time slightly ironised by the dance movements.
That the spectator only afterwards realises that this performance with around ten figures is played only by two people; is formidable.
Less fascinating is the other piece, in which the fantasies and memories of a woman increasingly locked in her own person are portrayed. The play is more earthy, but suffers from repeating the same images too often. Theatre Maska i Pokret will still perform during the Festival of Fools: on June 5 in the Bijlmerbajes, on June 6 at the Leidseplein.