FacebookTwitterInstagram
THE FACE FOR MASK 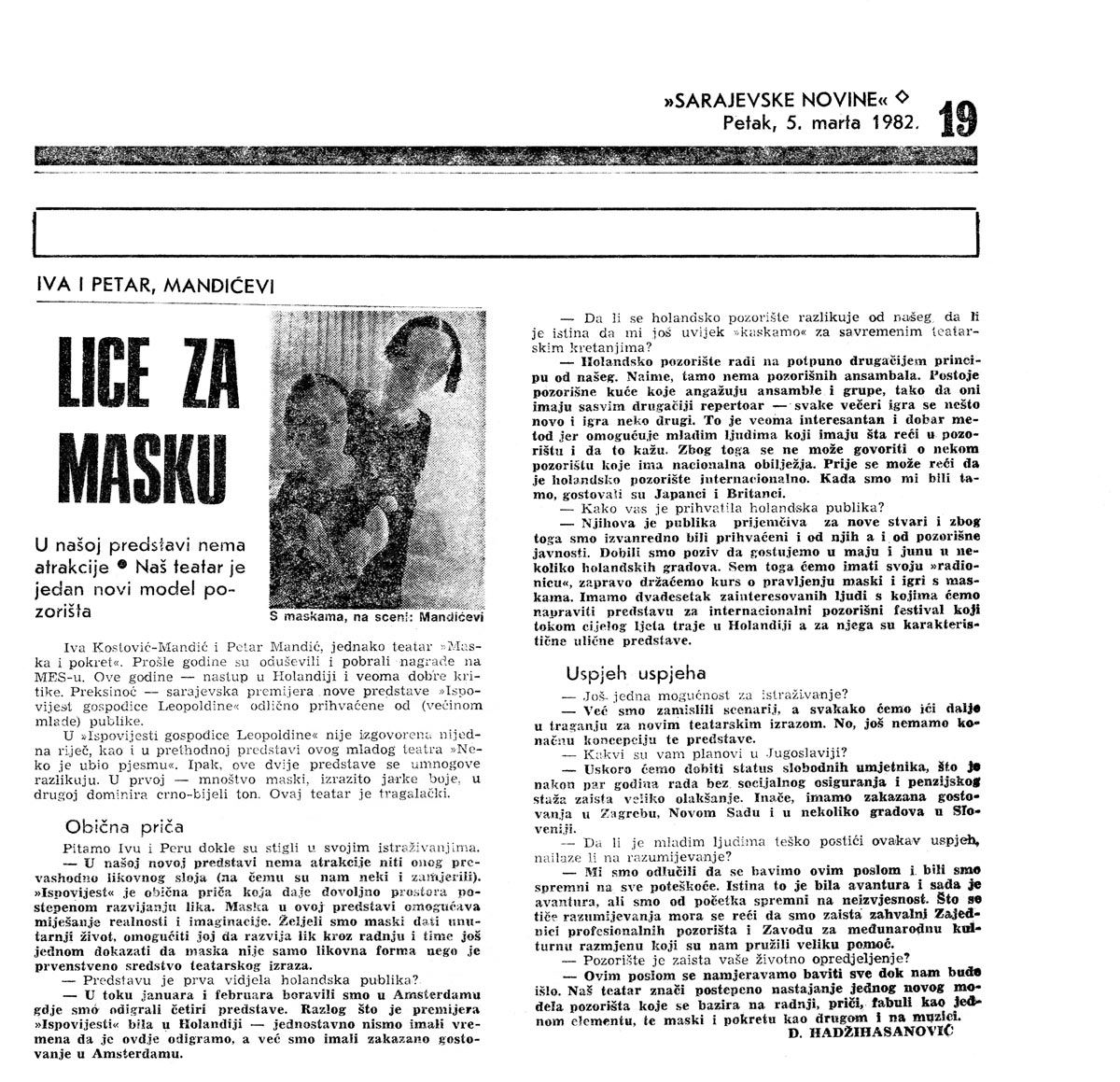 Our theatre is a new model of theatre

Iva Kostović-Mandić and Petar Mandić, equals “Maska i Pokret” theatre. Last year they delighted and picked up awards at the MESS. This year – a performance in the Netherlands and very good reviews. Two nights ago – the Sarajevo premiere of the new play “Mme Leopoldine’s Memoires” was well received by the (mostly young) audience.
Not a word was uttered in “Mme Leopoldine’s Memoires” as in the previous play of this young theatre, “Somebody has Killed the Play”. Yet these two performances differ in many ways. In the first – a lot of masks, extremely bright colours, in the second dominated black and white tone. This theatre is exploratory.

We ask Iva and Pero how far they have come in their research.
— In our new play, there is no attractive enticement nor that primarily artistic layer (which some resented). “Leopoldine” is a simple story that gives enough space for the gradual development of the character. The mask in this play allows for a mixture of reality and imagination. We wanted to give the mask an inner life, enable her to develop a character through action and thus prove once again that the mask is not just an art form but is primarily a means of theatrical expression.

The play was first seen by a Dutch audience?
— During January and February we stayed in Amsterdam where we played four shows. The reason that the premiere of “Leopoldine” was in the Netherlands – we simply did not have time to play it here, and we already had a scheduled tour in Amsterdam.

Is Dutch theatre different from ours, is it true that we are still “lagging” behind contemporary theatrical movements?
— The Dutch theatre works on a completely different principle than ours. Namely, there are no house-theatre ensembles there. There are theatres that hire ensembles and groups, so they have a completely different repertoire – every night something new is played and someone else plays. It is a very interesting and good method because it allows young people who have something to say in theatre to say it. That is why we cannot talk about a theatre that has national characteristics. Rather, it can be said that the Dutch theatre is international. When we were there, the Japanese and the British were guests.

How were you received by the Dutch audience?
— Their audience is receptive to new things and that is why we were extremely well accepted by them and by the theatre public. We received an invitation to visit several Dutch cities in May and June. In addition, we will have our own “workshop”, in fact, we will hold a course on making masks and playing with masks. We have about twenty interested people with whom we will make a play for the international theatre festival that lasts throughout the summer in the Netherlands, and it is characterised by street performances.

Another research opportunity?
— We have already imagined the script, and we will certainly go further in the search for a new theatrical expression. But we don’t have the final conception of that play yet.

What are your plans in Yugoslavia?
— We will soon get the status of free artists, which is a really big relief after a couple of years of work without social security and retirement. By the way, we have scheduled guest appearances in Zagreb, Novi Sad and in several cities in Slovenia.

Is it difficult for young people to achieve this kind of success, do they find understanding?
— We decided to be in this business and we were ready for all difficulties. True, it was an adventure and now it is adventure, but we are ready for uncertainty from the beginning. In terms of understanding, it must be said that we are really grateful to the Community of Professional Theatres and the Institute for International Cultural Exchange who have given us great help.

Theatre is really your lifetime calling?
— We intend to pursue this business as long as we can. Our theatre means the gradual emergence of a new model of theatre that is based on action, story, a plot as one element, and masks and movement as another, and on music.