FacebookTwitterInstagram
THE TWO OF THEM – THE WHOLE THEATER 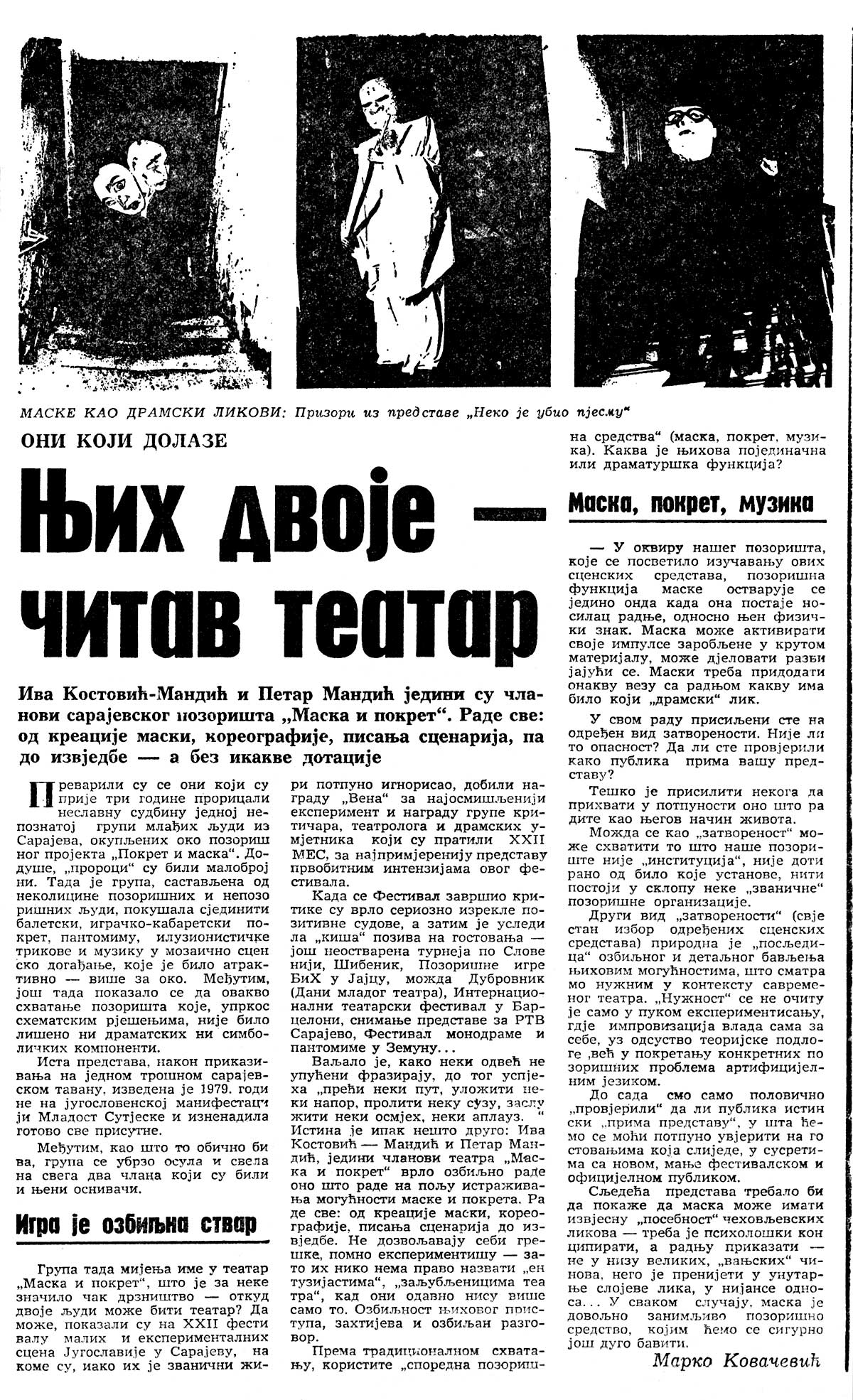 THOSE WHO ARE COMING | BORBA

THE TWO OF THEM THE WHOLE THEATRE

Iva Kostović-Mandić and Petar Mandić are the only members of the Sarajevo theatre “Maska i pokret”. They do everything: from mask creation, choreography, playwriting, to performance – without any grant

Those who three years ago predicted the infamous fate of an unknown group of young people from Sarajevo, gathered around the theatre project “Movement and Mask”, were deceived. Honestly, the “prophets” were few. Back then the group, composed of several theatrical and non-theatrical people, tried to combine ballet, dance-cabaret movement, pantomime, illusionist tricks, and music into a mosaic stage performance, which was attractive – more to the eye. However, even then, it turned out that this understanding of the theatre, which, despite the schematic solutions, was not devoid of neither dramatic nor symbolic components.

The same performance, after being shown in dilapidated Sarajevo attic, was performed in 1979 at the Yugoslav manifestation Sutjeska’s Youth and surprised almost everyone present.

However, as it usually would be, the group soon broke up and was reduced to only two members who were its founders.

Playing is a serious matter

The group then changed its name to theatre “Maska i Pokret”, which for some even meant audacity – how can two people be a theatre? Yes it can, they showed at the XXII Festival of Small and Experimental Stages of Yugoslavia in Sarajevo, where, although the official jury completely ignored them, they received the “Ven” award for the most thoughtful experiment and the award of a group of critics, theatrologists and drama artists who followed the XXII MESS, for the most appropriate performance to the original intentions of this festival.

When the Festival ended, the critics have passed very seriously positive judgements, followed by a “rain” of invitations to perform – still to come tour in Slovenia, Šibenik, the BiH Theatre Play in Jajce, perhaps Dubrovnik (Days of Young Theatre), the International Theatre Festival in Barcelona, recording of the play for RTV Sarajevo, Festival of monodrama and pantomime in Zemun…

To achieve that success, as some much-uninformed people paraphrase, it was necessary to “cross some road, make some effort, shed some tears, earn some smile, some applause.” The truth is something else: Iva Kostović – Mandić and Petar Mandić, the only members of theatre “Maska i Pokret”, are doing very seriously what they are doing in the field of researching the possibilities of masks and movements. They do everything: from mask creation, choreography, playwriting to performance. They do not allow themselves to make mistakes, they experiment carefully – that is why no one has the right to call them “enthusiasts”, “theatre lovers”, when they are no longer just that. The seriousness of their approach also requires a serious conversation.

According to the traditional understanding, you use “secondary theatrical means” (mask, movement, music). What is their individual or dramaturgical function?

— Within our theatre, which is dedicated to the study of these stage means, the theatrical function of the mask is realised only when it becomes the bearer of the action, ie its physical sign. The mask can activate its impulses trapped in the solid material, it can act by evolving. To the mask, it should be added the connection with the action that any “dramatic” character has.

In your work, you are forced into a certain kind of confinement. Isn’t that a danger? Did you check how the audience receives your performance?

— It’s hard to force someone to fully accept what you’re doing as their way of life.
Perhaps as a “containment”, it could be understood that our theatre is not an “institution”, it is not subsidised by any organisation, nor does it exist within some “official” theatre organisation.

The second type of “containment” (conscious choice of certain stage means) is a natural “consequence” of serious and detailed dealing with their possibilities, which we consider necessary in the context of contemporary theatre. “Necessity” is manifested not only in mere experimentation, where improvisation rules on its own, in the absence of a theoretical basis, but also in the initiation of specific theatrical problems with artificial language.

Up to now, we have only partially “checked” whether the audience is truly “receiving the play”, which we will be able to see for ourselves at the guest appearances that follow, in meetings with new, less festival and official audience.

The next performance should show that a mask can have a certain “specialness” of Chekhov’s characters – it should be psychologically conceived, and the action should be presented – not in a series of large, “external” acts, but transferred into the inner layers of the character, into the nuances of the relationship… In any case, the mask is interesting enough theatrical tool, which we will surely deal with for a long time to come.