FacebookTwitterInstagram
THE UNIVERSAL WORLD OF THE MASK 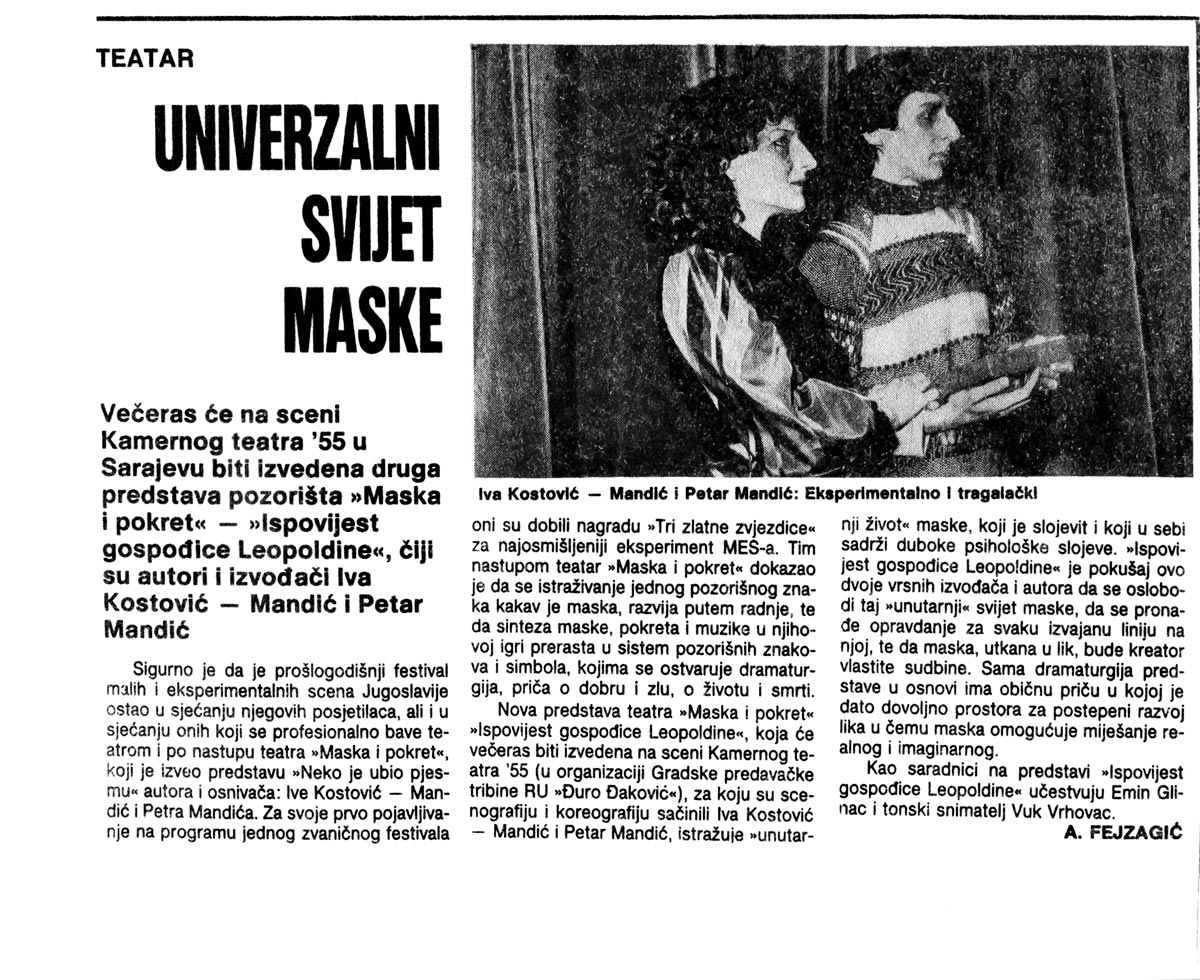 Tonight on the stage of the Kamerni Teatar 55 (Chamber Theatre 55) in Sarajevo, the second play of theatre “Maska i Pokret” will be performed – “Mme Leopoldine’s Memoires”, whose authors and performers are Iva Kostović – Mandić and Petar Mandić.

It is certain that last year’s festival of small and experimental scenes of Yugoslavia remained in the memory of its visitors, but also in the memory of those who are professionally engaged in theatre, because of the presence of theatre “Maska i Pokret”, which performed the play “Somebody has Killed the Play” by the authors and founders: Iva Kostović-Mandić and Petar Mandić. For their first appearance on the program of the official festival, they received the “Three Golden Stars” award for the most thoughtful MESS experiment.

With that performance, “Maska i Pokret” theatre proved that the research of a theatrical sign such as a mask is developing through action and that the synthesis of mask, movement and music in their play grows into a system of theatrical signs and symbols, by which the dramaturgy, the story of good and evil, life and death is accomplishing.

The new play of theatre “Maska i Pokret” “Mme Leopoldine’s Memoires”, which will be performed tonight on the stage of Kamerni Teatar 55 (organised by the City Lecture Tribune RU “Đuro Đaković”), for which the scenography and choreography are made by Iva Kostović-Mandić and Petar Mandić, explores the “inner life” of the mask which is complex and which contains deep psychological layers.

“Mme Leopoldine’s Memoires” is an attempt by these two excellent performers and authors to liberate this “inner” world of the mask, to find a justification for every sculpted line on it, so that the mask, woven into the character, be the creator of its own destiny. The dramaturgy of the play itself basically has a simple story in which enough space is given for the gradual development of the character, whereby the mask enables the mixing of reality and the imagination.