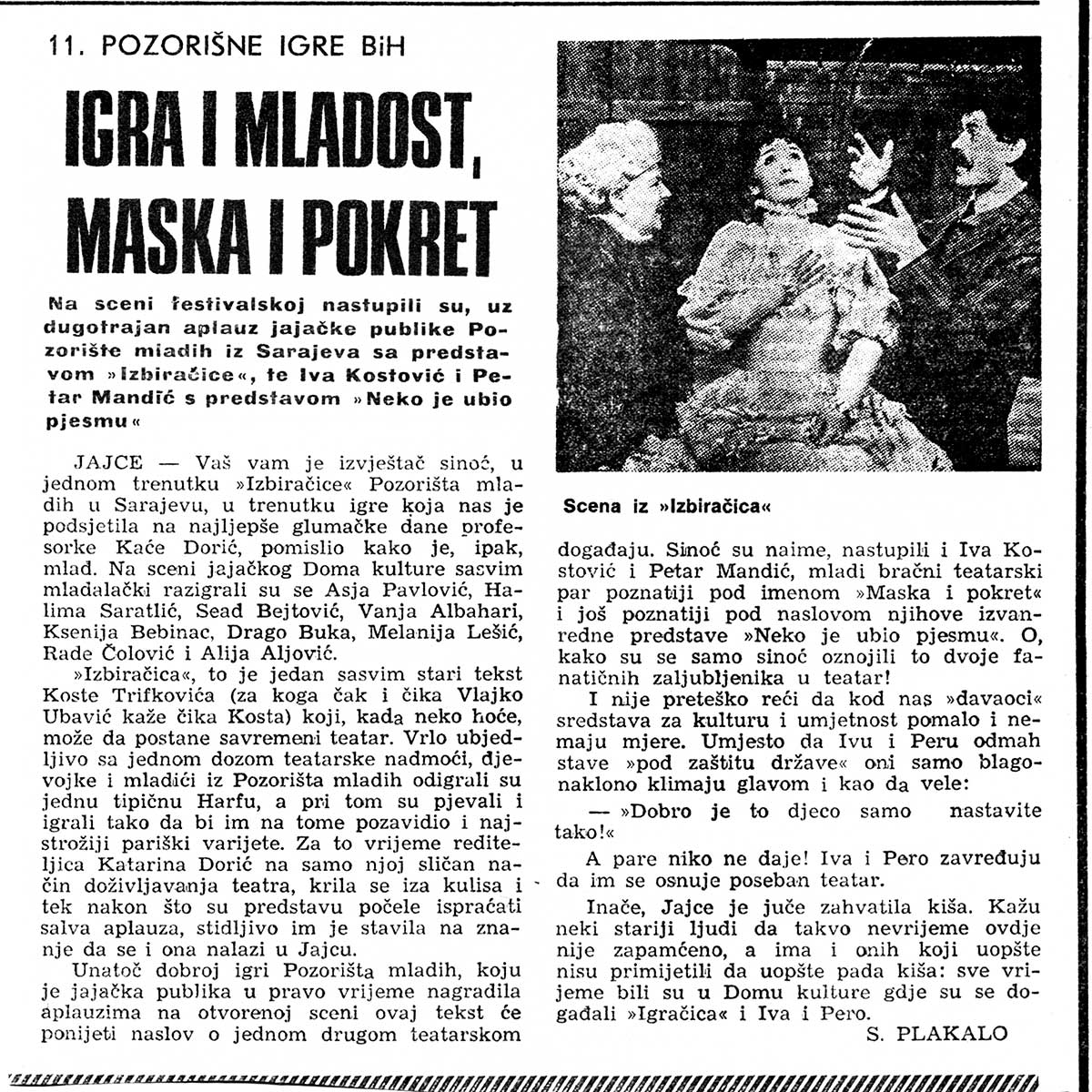 YOUTH AND PLAY, MASK AND MOVEMENT

The Youth Theatre from Sarajevo with the play “Fastidious Girl” and Iva Kostović and Petar Mandić with the play “Somebody has Killed the Play” performed on the festival stage, with a long round of applause from the Jajce audience.

JAJCE — Last night, here is, your reporter, during the play “Fastidious Girl” of Sarajevo Youth Theatre, in a moment that reminded us of the most beautiful acting days of Professor Kaća Dorić, thought how he, after all, still young is. On the stage of the Jajce House of Culture, quite youthfully played Asja Pavlović, Halima Saratlić, Sead Bejtović, Vanja Albahari, Ksenija Bebinac, Drago Buka, Melanija Lešić, Rade Čolović and Alija Aljović.

“Fastidious Girl” is a very old text by Kosta Trifković (when even Uncle Vlajko Ubavić says Uncle Kosta) who, when someone wants, can become a modern theatre. Very convincingly, with a dose of theatrical supremacy, the girls and boys from the Youth Theatre played a typical Harp, and at the same time they sang and danced so that even the strictest Parisian variety would envy them. During that time, director Katarina Dorić hid behind the decor, and only after the show began to be accompanied by volleys of applause, she shyly let them know that she was also in Jajce.

Despite the good play of the Youth Theatre, which Jajce audience at the right time rewarded with applause on the open stage, this text will take the title of another theatrical event.

Namely, Iva Kostović i Petar Mandić performed last night, a young married theatre couple better known as “Maska i Pokret” and even better known under the title of their extraordinary play “Somebody has Killed the Play”. Oh, how those two fanatical theatre lovers just sweated last night!

And it is not too difficult to say that in our country the “donors” of funds for culture and art have little or no measures. Instead of immediately putting Iva and Pero “under state protection”, they just nod benevolently and seem to say:
— “It’s good, kids, just keep on going like this!”

And nobody gives money! Iva and Pero deserve to have a special theatre established for them.

By the way, Jajce was hit by rain yesterday. Some older people say that such a storm is not remembered here, and there are those who did not notice that it rains at all: all the time they were in the House of Culture where “Dance-idious” and Iva and Pero were happening.

IGRA I MLADOST, MASKA I POKRET